The movement toward full electric powertrains is accelerating,
but will the automotive (service) infrastructure be ready?

CVETs as key to transition to
mass EVs on the road

The lightweight and increased efficiency of CVET when used in current vehicles can meet the demands of the 21st century's ecologically-conscious consumer. CVET is capturing real environmental value. CVET can provide a cost-effective answer to the efficient use of energy through the varieties of powertrains as they continue to evolve. CVET is aimed at meeting the ongoing need for improving a vehicle's efficiency of energy use, during the transition phase of new technologies and beyond. 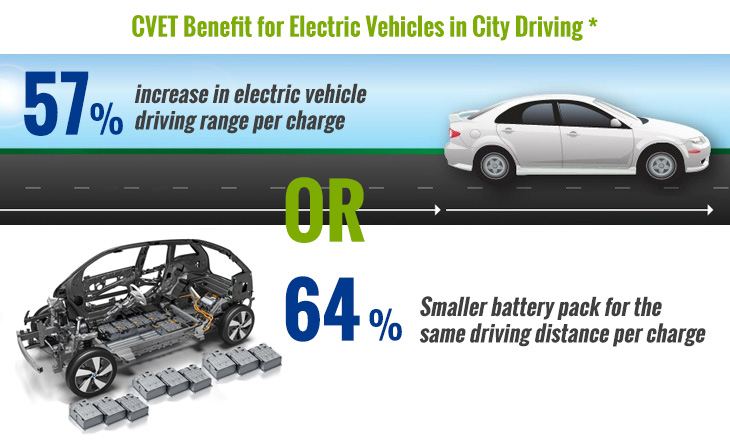 * CVET transmission enables use of smaller electric motors for EVs. 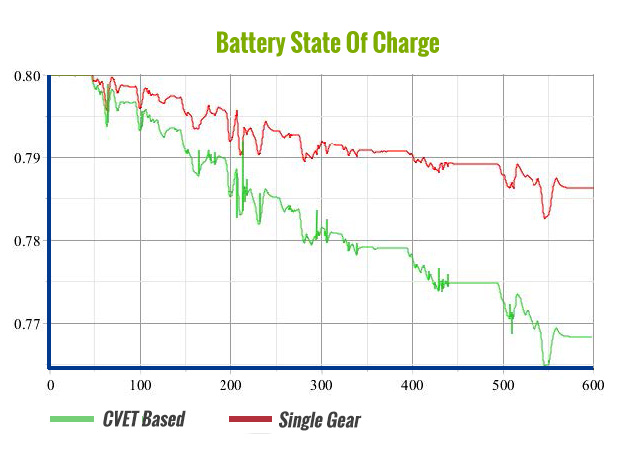 The battery State of Charge (SoC) from CVET-based and Single-gear operation after 10 minutes of city driving. EV with CVET in EPA NYC Drive Cycle reduced energy consumption by more than 57% from 37.4kWh/100 miles to 16.2kWh/100 miles. *

*Reported by Maplesoft, a world-leader in the simulation of vehicle powertrains

CVET as the bridge for Gas and Diesel vehicle

The demands of the 21st century consumer are ecologically-conscious. The lightweight and increased efficiency of CVET when used in current vehicles can meet the demand of the economy. CVET provides environmental value by reducing exhaust emissions. CVET is aimed at delivering a cost-effective and energy-efficient vehicle. CVET is the bridge between gas and diesel vehicles to Electric Vehicles. The use of energy through the varieties of powertrains is evolving. CVET is delivering the answer to meet the ongoing need for improving the energy efficiency of a vehicle. The time has arrived for CVET to make the transition phase of new technologies available to everyday consumers. 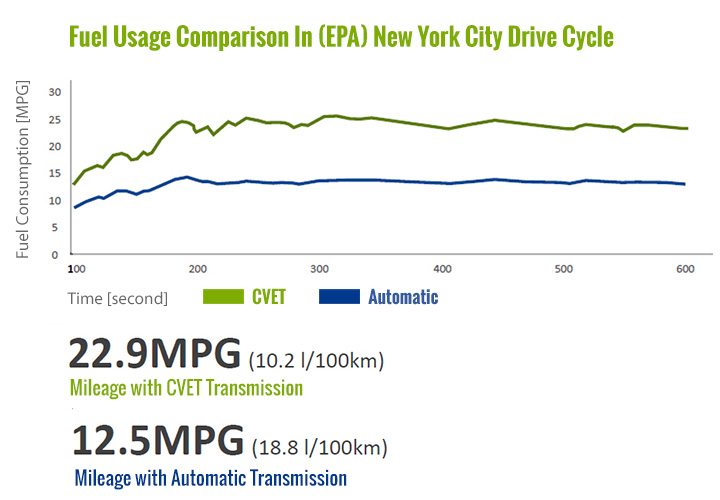 * Reported by Maplesoft, a world-leader in the simulation of vehicle powertrains.

The energy required to accelerate a vehicle from a stopped position is recovered during the deceleration cycle. CVET enables the operation of the electric motor at peak/optimal efficiency such that a significant percentage of the energy is recovered. This reduces the net amount of energy used for driving at all speed ranges, enabling driving much further between having to charge the battery.

CVET principle of operation enables it to recover regenerative energy during braking. CVET stores the energy in the battery.

CVET addresses the urgent need for more efficient use of gasoline and the reduction of exhaust emissions.

The new powertrain technologies for peak/optimal energy usage by vehicles have proven themselves to be not only the goal of the economy, but the mission of the world.

The global economy is challenged by energy consumption and waste production. CVET answers the urgent call for more efficient use of gasoline and the reduction of exhaust emissions. CVET has the ability to significantly increase the efficiency of energy and reduce fuel usage by gas and diesel powered vehicles.

CVET technology provides a seamless transition from gas and diesel vehicles into Electric Vehicles. By lengthening the driving range between battery charges, energy consumption with CVET is at a minimum.

CVET's mission is to educate the automotive infrastructure about the new CVET technology for powertrains.

Benefit of CVET for new power sources for EVs 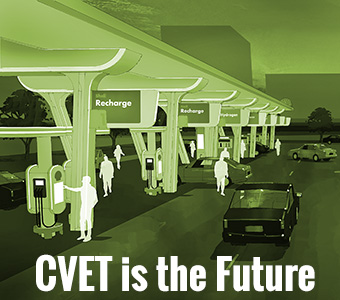